When Blisworth Tunnel on the Grand Union Canal was closed to the public in 1980 due to its dangerous condition, British Waterways Board, who are responsible for the upkeep and management of most of the British canals, were faced with the enormous problem of repairing one of the oldest and longest navigable canal tunnels in Britain.

The major problems in the tunnel were concentrated on the middle third of its 13/4 mile length - a section of some 1,000 metres.

The closure of this tunnel, which is in Northamptonshire, effectively cut off the northern section of the canal system from London and the South, the only alternative route being a wide detour by the Oxford Canal and the River Thames, so that it was vital to repair and re-open the tunnel as quickly as possible. However, the work required would be more difficult than that involved in the initial construction of the tunnel, since the ground had already been disturbed and weakened.

To overcome the problems at Blisworth, the Board devised a radical solution which is a fascinating story of 20th century engineering, and should guarantee the future use of Blisworth Tunnel for

many years to come

The engineers who constructed Blisworth Tunnel had left no records, and so British Waterways Board had to prepare their own, putting together all known information and carrying out a full

and detailed survey. An assessment of the condition of the tunnel was made from the full report of these findings. The conclusion drawn was that the middle third required major repairs, while the two outer thirds could be repaired by more traditional methods.

For most of its length the tunnel had been constructed through impermeable Lias clay, but porous sandstone beds, dipping from above the northern portal, approach the tunnel crown in its central section allowing groundwater to build up here. It is in this section that most failures have occurred.

The solution chosen by the Board involved digging out all the old central section and relining it with pre-cast concrete rings. The machine designed to carry out this enormous task is a tunnel shield. Before the main works could commence, the works area was drained of water, and a temporary

concrete road constructed on the bed to allow access for vehicles.

The slide, which shows the northern portal of the tunnel to the left, illustrates the problems, and shows the section to be relined.

This slide shows traditional repair being carried out in the northern third of the tunnel. Deteriorating

brickwork required local repairs in both the outer thirds. This involved breaking out the mortar

joints and repointing, and breaking out and replacing areas of damaged brickwork.

The only significant problems in the northern third were associated with construction and ventilation shafts, which had acted as drains allowing groundwater to flow from the sandstone to the Lias clay. The southern third, whilst not in such good condition as the northern third, should be adequate for

many years of further life given adequate routine maintenance.

As the detailed design of the relining progressed, a contract for exploratory drilling was let to Geotechnical Engineering in August 1982 to investigate the nature of the strata around the tunnel. Gaps behind the brickwork and in the surrounding rock and the presence of groundwater had resulted in an uneven build-up of pressure on the tunnel lining. At 1300 metres from the northern portal, a number of features, including a serious bulge in the brickwork, indicated a typical problem area.

Subsequently, a preliminary contract was let to John Mowlem & Co. Plc, and later this contractor was selected for the main relining works.

The white deposit on the brickwork in the slide is calcite from dissolved lime in the groundwater.

This diagram shows, in cross section, the remarkable method of repair for the central section of Blisworth Tunnel.

The existing brickwork was broken out and replaced with a pre-cast segmental concrete lining. For reasons of strength, a circular lining was chosen of 6 metres diameter, which would be finished with timber-faced concrete fenders. This method allows two-way traffic to continue through this important north/south link. Simpler strengthening processes such as inserting a smaller concrete lining within the tunnel or reinforcing the walls with a concrete skin would have made the tunnel too narrow for two-way operation.

The concept of a tunnelling shield was conceived by Isambard Kingdom Brunel for the construction of the first tunnel under the River Thames. The shield used for Blisworth Tunnel was custom built for the project by Grosvenor Engineering Ltd. It is shown here during a trial assembly on the factory floor, prior to dismantling and transportation to Blisworth.

In March 1983, work began on the hand excavation of a chamber 8 metres long x 7.6 metres in diameter within the tunnel to provide a workshop in which the tunnel shield could then be erected.

Temporary support works were required to the tunnel lining either side of the excavation, and to provide working platforms.

The shield chamber was lined with pre-cast concrete segments. A section of the old brick lining can be seen beyond the chamber. Temporary supports prevent the unsupported ground here from collapsing. The shield components were brought into the tunnel by flatbed lorry, and actually assembled in the tunnel in this chamber area.

By June 1983, the shield had been assembled in the tunnel and was ready to start work. The conveyor can be seen at the top of the steel framework, which is towed by the shield, and carried the broken out brickwork to dumper trucks. The red hook visible under the framework is attached to a small lifting beam under the conveyor provided to unload concrete segments from the same trucks.

The hydraulic excavator at the front of the shield (to the left in the slide) capable of rotating through 360° broke away the old brickwork, and a conveyor system carried the old bricks and soil to the back of the shield, where it was loaded onto dumper trucks for removal. The same trucks, on their journey into the tunnel, brought the concrete segments which were assembled and erected in a chamber at the back of the shield. Once a ring had been completed, the entire machine was jacked forward by means of hydraulic rams pushing against the newly completed concrete ring. The rams were then retracted leaving a space at the rear of the shield in which the next ring was assembled to begin the process again.

Brickwork ahead of the shield was supported by seven steel arches which were pushed up against the roof of the old tunnel to prevent an uncontrolled collapse of the old brickwork. As each ring of the new lining was completed at the back of the shield, the rear steel arch nearest to the shield was taken down and re-erected at the front, making room for the shield to move forwards in its cycle of work.

As the old tunnel was of a somewhat horseshoe cross section, the bucket also excavated some of the clay and sandstone, through which the original tunnel was driven, to create a circular profile to match the new lining. Extending poling plates at the top of the shield were used when required to support loose ground in the roof of the tunnel above the bucket. 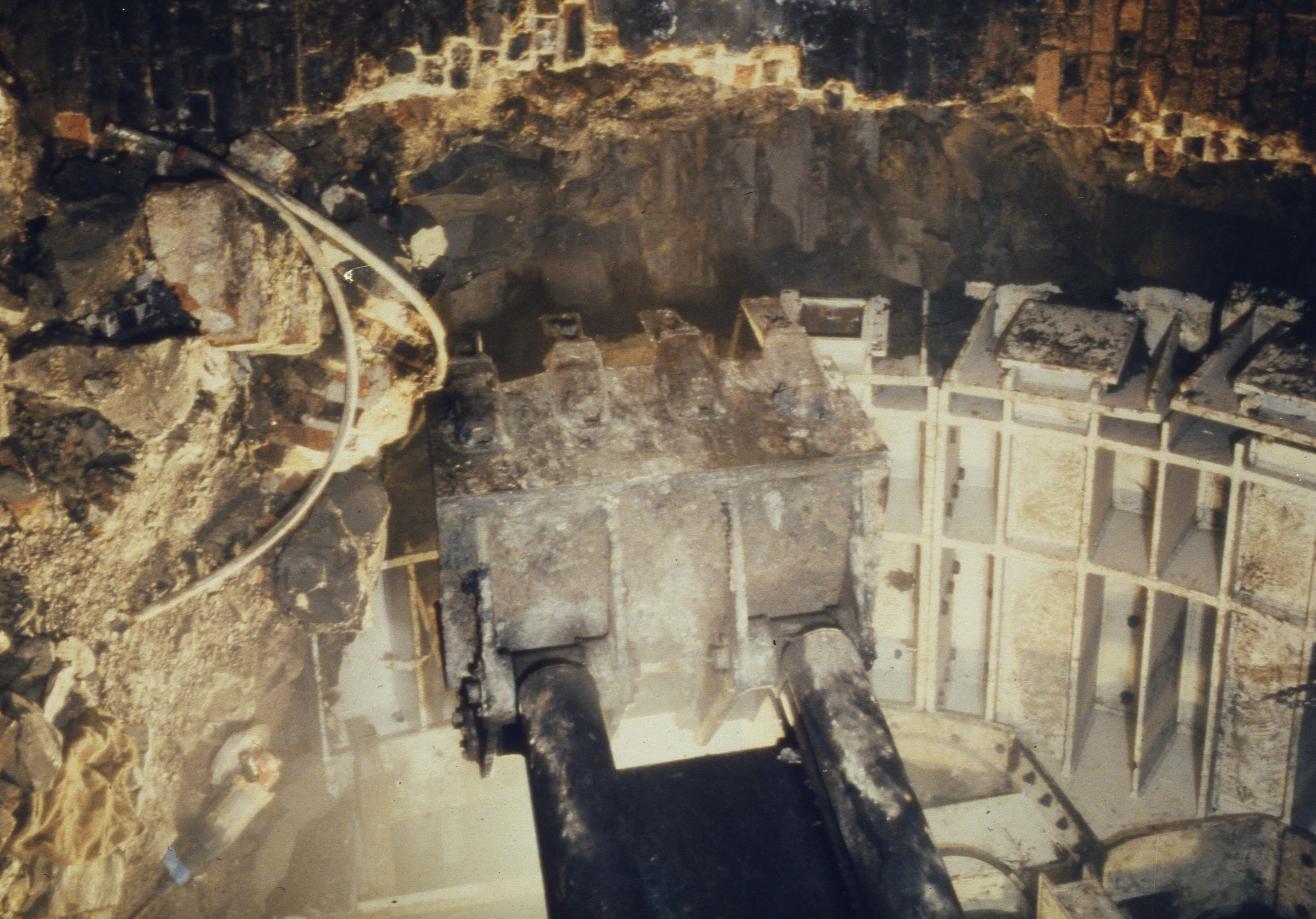 The seven steel arches were braced against the roof of the tunnel by an ‘A’ frame in front of the excavating head of the shield to prevent any progressive uncontrolled collapse of the old tunnel.

The dumper trucks were articulated Volvo 861 vehicles, and provided the transport system by which the concrete segments were brought in to the work site, and the excavated material was taken away. As there was no room for the lorries to turn in the tunnel, they reversed in and drove out. Two return journeys of the Volvos were required for each ring lining; two loads of spoil out and two loads of concrete segments in.

A suitable spoil tip was found adjacent to the site, and all excavated material was tipped there.

On completion, this will be covered with topsoil and landscaped.

After unloading from the dumper trucks, the segments were laid flat and fed through to the erection area on a conveyor. As there was no space to change the order of segments, it was vital that they were loaded onto the dumper trucks in the right order.

A combination of hydraulic winches and hydraulic powered handling arms were used to locate the segments into their exact positions. The heaviest segments weighed 1,6 tonnes so mechanical assistance was essential

This view, taken from the back of the shield and looking Northwards along the completed section of relined tunnel, shows the steel framework at the rear of the shield riding on the concrete fenders. The red beam of light is a very precisely positioned laser. This shone onto a graduated target on the shield and was used to keep the machine on course. Steering was accomplished by using timber packings between rings to make any small adjustments to the alignment.

The new lining contrasts with the old brick tunnel. The relining work was completed at the end of 1983, and the shield dismantled and removed from the tunnel.

It was imperative not to hold up the highly mechanised process of driving the tunnel so, where the tunnel passed under existing ventilation shafts, an opening was left to provide access, and repairs and permanent connections were completed after the shield had passed. Outlets from the tunnel's drainage system were also reconstructed. Finally, the concrete road was removed before the tunnel was reflooded.

Reinstatement works will be undertaken at both ends of the tunnel to restore the canal and countryside features.

The new tunnel was reopened to navigation on 22nd August 1984 by British Waterways Board Chairman, Sir Leslie Young, CBE DL.

A plaque at each portal now commemorates the completed works, which will ensure safe cruising to all those who enjoy the waterways for many years to come.

Slides and text by British Waterways Board.

Further information on all aspects of inland waterways can be obtained from: British Waterways Board, Melbury House, Melbury Terrace, London NWI 6JX.